Bureau of Space Exploration and Rocketry 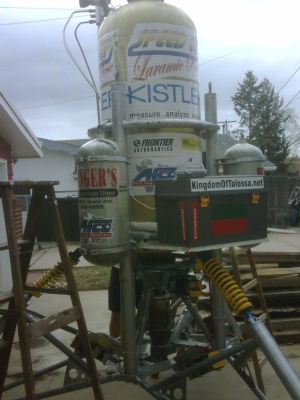 The Laramie Rose, first rocket in the Kingdom's space program

The Bureau of Space Exploration and Rocketry (Büreu d'Esploraziun Espaçal es Rac'hetría, or BEER) was an agency of the Prime Ministry chartered by Talossan statutory law 38RZ8 (The SQUIRRELS ... IN ... SPAAAAAAAACE Act). It has since been dissolved by The Science Rules! Act.

In 2007, Kingdom citizens donated funds in the amount of 323¤57 to help fund the BEER's first rocket, the Laramie Rose, built to which compete in the Lunar Landing X-Prize. The funds were delivered personally by King John and Seneschal Hooligan on 19 April 2008 at a test-firing of the rocket at its launch center, an abandoned nuclear missile silo outside Chugwater, Wyoming in the United States.

On October 28-31 2008 Roibeard Laira, the head of the BEER, visited Mojave, California to observe the Northrop Grumman Lunar Lander Challenge, stating that the event and others like it "validated the BEER's space exploration policy of sitting back and letting the private sector do it." Said Laira, "Not only does this produce more innovative solutions, it's much easier on the national treasury."

Laira was not merely a bystander at these events, but provided active participation in the name of the Kingdom. Masten Space's rocket Xoie was damaged by a fire caused by a fuel leak on it's first flight. A team of volunteers, including Laira, helped repair the vehicle before its next flight window the following morning.

As of 2012, the Laramie Rose had been successfully test-fired and launched many times, in preparation for competition in major private space exploration prize competitions.

On 7 February 2011, learning that 1,235 extra-solar planets had been discovered by the Kepler Mission undertaken by the United States space bureau NASA, the BEER, after completing an arduous six-day campaign involving the Twittering of "dibs" and "called it", claimed to have successfully claimed 796 of the planets for Talossa. Said Róibeard Laira, BEER head, "We're very proud to announce that we got near-Earth-size planets Kepler-41a and Kepler-85b as well as three of the planets in the six-planet system Kepler-11." When asked how Talossans will travel to their newly claimed lands Laira said, "We'll get right on that."