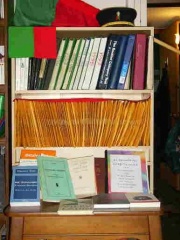 The Lost Archives are the vast collection of Talossan documents and artifacts, dating back to the founding of the Kingdom, and held by former King Robert I. In 2006/XXVII, Robert I attempted to sell the Lost Archives to the Kingdom for 4000¤0 ($6,000 USD), and threatened to destroy them if no sale was made. His stated reason was that he was moving domiciles and had no storage room, and that he had no use for the documents himself.

The Lost Archives are distinct from the published compilation of past Clarks found in Robert I's National Archives, 1987-1996.

In a 17 Sep 2007/XXVIII summary,[1] Robert I stated the contents of the Lost Archives were as follows:

Contents of the Archives

Box 1: Executive Branch (Monarchy, Constitutions; other official stuff not included below, including symbols and emblems of state)

(BOX CURRENTLY HAS NO CONTENTS)

Box 12: Historical Writings about Talossa, completed and not completed

The Artifacts collection (Box 16) contains a number of uncatalogued items including remnants of the original Talossan flag first sewn in December of 1979 and draped across the coffee table on the country's formal declaration of independence. The Byzantine follis coin, dated to the time of the Donatist migration from Morocco to ancient Wisconsin (ca. 502 A.D.) and discovered by Sandee Prachel in Vuode Province in 1988, is also in the collection.

Robert I also provided a sample of the contents of just one folder, describing the documents in Box 12, Folder 4 to be as follows:

1. "Areal Geology" map of Talossan soils, copied from a 1906 source.
2. October 1984 (?) map, hand-drawn, of Pengöpäts Antarctic Territory, showing proposed placenames. 3. "Talossan National Elections since 1981," computer graphs and typed explanations, half-circle graphs showing parties and how many seats they won in elections between 1981 and 1992.
4. "National Anthems of the Kingdom of Talossa." List (dated 25 November 1992) of the 11 tunes that had, till that time, served as Talossa's national anthems. Includes 5 Abba songs, the Moody Blues, the Soviet national anthem (with Ben's new words) and the "Anthem" from the musical "Chess."
5a. "RT Elections by Alignment" -- Analysis (ca. 1991) of Talossan elections by political leaning, e.g. left, centre and right.
5b. (On reverse of previous) -- Election ballot signed by Dave Kuenn in the 1990 "National Destiny Referendum."
6. "The Talossan Calendar". Day by day explanation of the abortive Talossan calendar used by the Kingdom between June and November 1982, with 18 months of 20 days each. Written on 30 December 1992.
7. "The Talossan Yearbook" (ca. June, 1985). Typed list of topics to be included in a never-published project, including a two-page typed description of Talossan political parties.
8. "Talossa" (similar to the preceding; May, 1985). Description of Talossa in the same format as the Statesman's Yearbook.
9. "Støtanneu: A Guide to the Julian Calendar Issues." Computer-typed list of all issues of the newspaper between 5 January 1981 and 2 August 1981, showing the actual dates and the "Julian Calendar" dates which were used on the hand-written issues themselves.
10. "National Symbols of Talossa." Evidently an illustration meant for the 1992 edition of the History of the Kingdom of Talossa, this page shows the country's flag, coat of arms, and abortive "Dallas Pätsilor" anthem and its awful, uninspired words (written by Ben).
11. "Talossan Land Area," typed ca. 20 April 1982. List of annexations and area in square feet (!) showing that Talossa at that time was bigger than Vatican City.
12. 1987 signed letter from King Florence I, dedicating that year's edition of the History of the Kingdom of Talossa. ("Two hundred pages of certified Ben should be sufficient for any reader in the Kingdom or elsewhere.")
13. "Flags -- Information". Strange little half-page description of Talossa, evidently printed from some software package with data about countries. Date unknown.
14. "Sections and Maps in the Atlas Historic Talossan". Typed list of maps to be printed in a never-published atlas, ca. 1983.
15. "Talossan Historical Chronology." (ca. November 1984), list of historical events in Talossa gleaned from past issues of the newspapers. Probably created as notes for the 1985 edition of the History of the Kingdom. 4pp.
16. "Preface" to an abridged edition of the 1985 History, written in order to replace the pre-1979 American Indian/Berber stuff in that book. Not known if this was ever issued.
17. "To the Reader". Letter from King Robert to readers of the 1985 History, a preface to that work.
18. "RT Almanac Outline" -- computerized list of possible topics to write on in an unpublished work.
19. "Talossan Elections, 1985-1996." Computer graph of election results for all parties, based on the format in Kenneth Janda's works on political parties. 2pp.
20. "Cosâ Seat Distribution". Computer chart (ca. 1992) showing seats apportioned by left/right/centre alignment from 1985 to 1992.
21. "Støtanneu Publication". Computer chart (ca. 1992) showing number of words per year (!) in Støtanneu, showing peaks in 1982, 1986 and 1992 -- perhaps as a sort of gauge of national activity.
22. "Support for the Government." Computer chart (ca. 1992) showing results on the Vote of Confidence in the Clark from 1987 to 1991.
23. Hand-drawn map showing Talossan topography. Ca. 1985?
24. "Crimes Reported" -- map from Milwaukee newspaper showing crime rates by census tract (Talossan cantons). Ca. 1990, but not dated.
25. "The Talossan Cosa by Party Percentage, 1985-1990". Computer graph.
26. "Census Returns for Natives". (Ca. 1984) Census information about inhabitants of Talossan cantons.
27. "United Nation Maps". Date unknown, xeroxed from library sources showing Potawotami (etc.) land claims in 19th century Milwaukee.
28. "Map 6-2 Eighteenth Ward..." Map from unknown source showing when European settlers subdivided and settled lands in northern half of Talossa between 1880 and 1910.
29. "Office Occupancy Rates". Newspaper map (undated) showing information by census tract. Ca. 1990?
30. "N:reu Averátx dels Proxhets për Clark" (ca. 1992), computer graph showing number of bills per Clark from 1987 to 1992. Interestingly, written in Talossan!
31. "Sürvéi Xheodetic no. 1" List (ca. November 1984) of cantons, typed, with areas in acres and square feet. In Talossan.
32. "1840 Map Key" -- assorted xeroxed maps showing growth of Milwaukee in 19th century, including streets, areas where 'privy vaults' were prohibited after 1892 (!), streetcars (1889-1910) and location of ethnic minorities.
33. "Unpublished Map History of Talossa": Undated collection of hand-drawn maps (by Ben) of Talossan history. 6pp, perhaps 1985.
34. Untitled hand-drawn maps, similar to #33, ca. 1985.
35. Milwaukee County Census Tract Map.
36. "Sweden, c. 600 BC." Map of Talossan natural areas and notes on Swedish history, perhaps for a Talossan atlas illustrating Ben's forebears.
37. "Map of North America," 1985. Showing North America after 1783 when the USA annexed the area around Talossa. Hand-drawn by Ben.
38. Photocopy portrait of Solomon Juneau.
39. Untitled illustrations from Ben's 1979 political rant "Uusille Viljelykselleme," written before Talossa existed. Illustrating Ben's pre-Talossan adolescent politics for some unpublished history.
40. "Historical Update -- 9 Sept 93". Some supplementary notes (typed on computer) correcting errors in earlier Talossan histories. For example, Ben remembers it being a "snowy day" when he first thought of the idea of Talossa at the public library on 13 December 1979 -- but this paper reports that Ben consulted back issues of the Milwaukee newspapers for that week, and found there was no snowstorm. Has further information questioning the date on which Talossa was first thought up. Also contains tidbits from Ben's "2212" novel manuscript, which was written at the same time as Talossa was born.