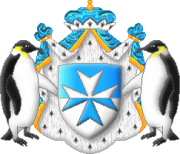 The Free Commonwealth of Penguinea (known in its own language as it-Frij Penginijgulad) was a micronation of around 20 citizens claiming territory on St. Helena Island. Many of its citizens had been or would be Talossan, and Penguinea was a key influence on the culture of the Republic of Talossa

The Free Commonwealth of Penguinea was founded on 26 Sept 1997, after the departure of several citizens and prospective citizens from Talossa. Inspired by the Talossan territory of Péngöpäts, the country was founded as a cultural democracy in opposition to perceived autocracy in a Talossa ruled by King Ben. Evan Gallagher was unanimously elected "Provisional Protector," and he proclaimed the Free Commonwealth and a new constitution on the 16 Oct 1997. Penguinean democratic institutions were the Protector and House of Keys (executive branch), the Instrument of Government (the constitution), the Althing and Lawspeaker (legislative branch) and a High Court.

Although the political system was based on individuals, there were also a few political parties: e.g. Gothic Peculiar Party (it-Gothijic Watacxi Plejd or GWP) and Pheurton People's Party (PPP). Penguinea was a vivid community with a rich cultural life, having many magazines, its own radio broadcast, web-serials, bands, and an online gallery of art and active participants.

In 2000, after debate on its future, Penguinea transformed into the Pangaean Community, and later into the online community of Polyphony.

Penguinea had its spiritual home on St Helena Island, off the coast of Queensland, Australia. Fort Cromwell was its capitol. It was later divided into "wapentakes" and "shires:" Mu, Bran, Pheurton, Tatankistan/Yansastan and Ethelwilma.

A few Penguinean webpages still survive on the net: