The Talossan Press Association (TPA) is dedicated to the promotion of the Press and Media of Talossa. The TPA provides opportunities for journalists and others interested in the media to learn about new developments and debate the latest issues concerning the Talossan media industry.

The TPA was founded in 2009 by Éovart Grischun and was the direct successor to the Talossan Press Club, which had lay dormant for several years. Grischun served as the Association's chairperson from its founding in 2009 until August 2013. The current chairperson is Sevastáin Pinátsch, who adopted the role on 8th July 2014, following the resignation of the previous chairperson, Munditenens Tresplet.

The TPA encourages Talossan journalists to voluntarily embrace the following guidelines and Code of Ethics, regardless of place or platform. The code is intended not as a set of "rules" but as a resource for ethical decision-making when reporting. The TPA holds at its core the belief in the free flow of information. These guidelines are here to aid in the free flow of information via the Talossan Press and only are here to assist in an untampered flow. At times, some guidelines may be overlooked to get to the core of a story.

NB: Affiliate Members are permitted to display the 'Affiliate Member's Seal' on their websites, blogs or publications. Readers can be sure that when this symbol is displayed that the following code has been followed whenever possible (see image). 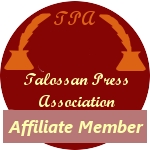 Former Logo of the TPA. The new one cannot be uploaded to TalossaWiki due to the wiki's restrictive licensing requirements.

The Association welcomes as members those with an interest in journalism and the media including past and present journalists, broadcasters, bloggers, printers, designers, cartoonists, etc. As a member, one receives access to member forums on the TPA website.

Affiliate members can also call for the assistance of the association in legal matters, including libel cases.

To inquire about membership, or for any other questions, send a private message to Sevastáin Pinátsch on Wittenberg.

The Association bestows a number of awards recognizing both current excellence and lifetime achievements: ‘Article of the Year’, ‘Journalist of the Year’, and ‘The Saint Maximilian Kolbe Award for Fine Writing’. These are awarded in the Spring, covering a publishing period beginning on April 1 and ending on March 31 each year.