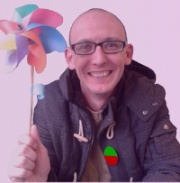 Éovart (Eðo) Davíu Grischun (Edward "Eddie" David Grice, b. 27 October 1984), is a citizen of Talossa and of the province of Vuode after becoming a naturalized Talossan on 20 February 2009. He is the currently serving as Minister of the Interior and as a Member of the Cosa.

Grischun has been involved in many aspects of Talossan life including party politics, provincial politics and national government as well as being a contributor to Talossan culture in general. He is a former leader of the CSPP, PP and RUMP political parties, a multiple term Member of the Cosa, a multiple term Senator and has held numerous offices in various capacities including cabinet level positions. He is also a recipient of the Prime Minister's Patriotic Award.

Grischun's initial entry to Talossan politics saw him joining the RUMP party during the 39th Cosa and being appointed to serve as Minister of Culture by Seneschal Ieremiac'h Ventrutx.

He then left the RUMP to join The Fair Governance Party (FGP) for the general election to the 40th Cosa, however, towards the end of the election, the FGP collapsed with all members going their separate ways. Grischun went on to join the Progressive Party.

After joining the Progressive Party, he was seated in the Cosa for the first time with two seats. He was later elected party leader in October 2010. However, the party soon fragmented due to internal differences between members. The core membership had changed from it's original line up and Grischun struggled to maintain a balance of ideals that appealed to the widening gap in party membership. In the January 2011 election the Progressives suffered losses with seat numbers going down from 89 to 57. Grischun resigned from the party and did not serve as an MC during the 42nd Cosa.

Grischun took a step back from politics (and Talossa in general) for the duration of 2013 when events in his personal life demanded his complete attention. He returned to activity in 2014 by launching a successful bid for the Vuodean Senate seat.

In February 2015, he announced his resignation from the Progressive Party to return to the RUMP Party, where his political career began six years earlier. In a public statement, he said a "slow evolution of realisation has been going on in my mind for some time now" and stated that key differences between his views and the direction of the government were reasons for his decision. He concluded that the RUMP was more in line with his political and ideological leanings than other parties.

In April 2016, he was appointed by Seneschal Cresti_Siervicül to serve as Minister of Culture for the third time. Later that year, in the December 2016 election for the 50th Cosa, he was re-elected as Senator for Vuode. Despite his name not appearing on the ballot paper, he was returned to serve as Senator for a second term receiving an overwhelming share of the local vote.

After holding his seat in the Senate for 26 consecutive Clarks over a period of just over 3 years, he resigned in December 2017 as he could no longer afford enough time and attention to the post. He then returned to the Cosa Chamber as an MC for the RUMP party.

In September of 2018 he was appointed to serve as Minister of the Interior. His first major project in this role was to enact reforms of the Kingdom's immigration systems.

In February 2012, Grischun made calls for Vuode to abandon the provincial constitution on the basis that it was failing the province. Along with fellow Vuodean citizens Sir Trotxâ Betiñéir and Viteu Marcianüs, he formed a Constitutional Convention and went on to spend the remainder of 2012 working on a new constitution which was adopted in April 2013. The current constitution of Vuode was primarily authored by Grischun and, as such, was sometimes referred to as 'The Grischun Constitution'.

Grischun was elected to serve as Premier of Vuode in June 2013 and then again in February 2014. His latest term expired in September 2014. Due to restrictions written into the provincial constitution, he was not eligible to seek a third consecutive term.

Serving in the Chancery

Grischun served as Deputy Secretary of State From April 2012 to December 2012 during the tenure of Secretary of State Iusti Canun. During this time he ran several Clark sessions on behalf of the Chancery as well as having responsibility over some immigration cases. He administered the first half of the July 2012 general election and also helped to certify the results at the conclusion of the election.

Grischun was born in Glasgow, Scotland, in October of 1984. He has one Dandelion, Avvi Grischun-Camerá and a rescued border collie named Lucy. He has a wide range of interests and pastimes. He is an avid cyclist and runner and is an outdoors enthusiast with hobbies such as hill walking, hiking, mountaineering and camping. He enjoys reading, watching documentaries and getting creative by drawing, painting or making music.