Fiôvâ, IPA: [ˈfi̯oːvɐ], also known as La Provînçù Liveradâ da Fiôvâ, pronounced [lɐ prɔvɨnˈsu lɪvɛˈɾaðɐ ðɐ ˈfi̯oːvɐ], or The Free Province of Fiova, is the 8th Province of the Realm. Established at the culmination of the Reunision of the Talossan people as the home Province for the former citizens of the Republic, it was formed from territory ceded by the Provinces of Maritiimi-Maxhestic and Maricopa which hosted the reviênsadéirs from 20 April 2012/XXXIII until the drafting and promulgation of the provincial Constitution and the Royal Proclamation on the 1st of June 2012/XXXIII, eight years after the founding event of the Republic. 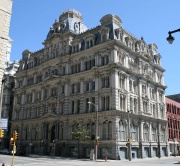