Els Zuávs da l'Altahál Rexhitál (The Zouaves of the Royal Bodyguard) is an agency of the Ministry of Defence dedicated to "creating, propagating, and promoting interesting creative and practical work of a Talossan nature."[1] Members of the Zuávs earn "real ranks for real achievement,"[2] as promotion is only possible through "creation, contribution, promotion, or preservation of Talossan culture."[3] It is the largest Talossan organization and one of the most successful. It has historically been the elite cultural force of the Kingdom.

Els Zuávs are studiously apolitical. While they are the "royal bodyguard," the unofficial motto of els Zuávs is "Dare something worthy," a nod to the Talossan Republican tradition. Further, no cultural works intended for directly political purposes are considered. The overall goal is to provide a place where new and established citizens can do fun things, separate from politics and with some friendly nudging and guidance.

The official schedule of ranks and the requirements for advancement are given as follows:[4] 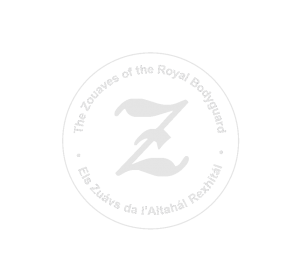 All enlistees begin with the rank of Private. While this may seem humble, it serves as an immediate notice that you intend to improve your country in a real way. Few Talossans can say as much.

Current Zuávs at this rank: 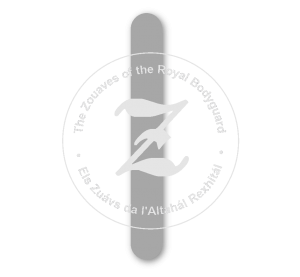 Promotion to Private Second Class (PSC) is predicated on any single good-faith exhibition of creation, contribution, promotion, or preservation of Talossan culture. For example, translating a single poem, creating and populating a new category of articles on the wiki, recording a single Talossan song, making a suite of promotional posters, or similar activities would each be sufficient to merit promotion. Activities unrelated to culture, such as writing laws, will not ordinarily be considered as justification for promotion. Failed attempts will also not merit consideration.

Current Zuávs at this rank:

Specialist Ten approved exhibitions are necessary for promotion to the rank of Specialist (SPC). Despite the title of the rank, there is in fact no requirement to specialize in any particular field of achievement. However, should a Specialist so request, they might be recognized as an expert in one particular regard.

Corporal Twenty approved exhibitions are necessary for promotion to the rank of Corporal (CPL).

Sergeant Thirty approved exhibitions are necessary for promotion to the rank of Sergeant (SGT). All sergeants must, further, pass the Sergeant’s Exam, a language exam focused on Talossan English phrases to be customarily used. It is expected that you will consistently employ these phrases in the place of their English equivalents when socially appropriate. The Exam may be retaken as many times as necessary, but promotion to Sergeant will not be considered without a passing grade.

Master Sergeant The highest enlisted rank may be reached after fifty approved exhibitions. An enlisted Zuáv at this rank will have made a lasting and distinct impression on Talossan culture; their place in Talossan history is assured. This is not an exaggeration. Only a score of people in Talossan history have ever reached this level of achievement.

Second Lieutenant Officers in the Zuávs are expected to help administer the organization, and will be assigned tasks as necessary. These tasks will generally be supervisory in nature. Master Sergeants who wish to advance to Second Lieutenant (SLT) must pass the Officer’s Exam, a basic language exam focused on brief conversational Talossan, before they are eligible.

Els Zuávs was created in November 2007/XXVIII (via statutory law 36RZ7), was intended as a land-based force, primarily charged with the protection of the Royal Family, but also operating as Talossa's "army." These duties were meant in the same tongue-in-cheek way as the rest of the Talossan military, and no one ever actually undertook any of their "duties." Members of the Zuávs were similarly supposed to outfit themselves, among other attire, in voluminous trousers; twelve-foot long woolen sashes; white canvas leggings; leather greaves; white gloves, and a tasseled fez. Further, they were charged, as far as was practical, with growing an enormous moustache -- again, all meant as a joking reference to the fact that Talossa had no need of a real military and so it was all play-acting. The official approved improvised weapon of the Zuávs was the bedpost (as specified by statutory law 38RZ18), which members of the Zuávs were intended to use in ceremonial exhibition drill exercises and competitions.

In 2019/XL, the organization was reformed and redirected to a new purpose as a cultural force.