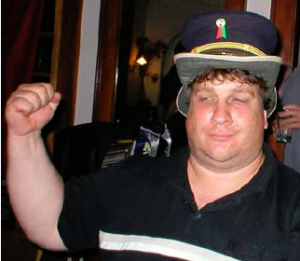 A friend and classmate of Talossa's founder, he initially participated in "Worldwide Singular Secession" by creating the micronation of Thord, a founding member of the League of Secessionist States, and alliance partner to Talossa in the Cone Wars. Later, after Verbotten abandoned Thord, he became the fourteenth person to become Talossan.

Verbotten resided in Florencia province since before its separation from Benito, a separation that he himself accomplished in 1996, establishing himself as the first Governor of the newly created province.

Verbotten was also one of the drafters of the 1997 Organic Law.

Verbotten supported the Progressive Conservatives and a variety of other parties during his years as a Talossan citizen. For several years, he served the country with distinction as a member of the Uppermost Court. Widely hailed as "the conscience of Talossa" (a description bestowed by Robert I) Verbotten was known for standing up to the country's other illuminati in defence of principle, and for helping to ensure that the tempers of the nation did not get too heated.

Verbotten renounced citizenship in the Kingdom on 14 April 2004 in response to the behaviour and actions of Robert I, saying "I could not see doing business with Ben as a possibility ever again." He joined the Talossan Republic after its formation in June of that year, and remained a citizen of the Republic for many years. He left the Talossan culture some years later and (as of 2012) resists urges to return.