listen)) (Provinçù Soveran da Cézembre) is a province of the Kingdom of Talossa. This small island, which lies off the coast of Saint-Malo, France, was claimed for Talossa by King Robert I during a visit to the island in 1982.

After the Republic of France made a 1984 attempt to enforce its own claim to the island, Robert returned in 1986 and defeated the barbed-wire technology that the French military had installed, thus reiterating Talossa's claim. Initially a colony, the island became Talossa's seventh province in 1996.

The capital of Cézembre is Kingsland, that portion of the Zone Interdite liberated by King Robert I.

The weather in Cézembre Province is typical of other islands in the English Channel.

The island of Cézembre presents a pleasant sand beach to the south, but is otherwise rimed with rocks along its shores. Formerly Cézembre was connected to its southern neighbor, Saint-Malo, by low ground. In 1438, however, this land-bridge was forever covered with the ocean.

On the island of Cézembre was built a Vault dedicated to Saint-Brandan built in 1420 per Raoul Boisserel priest in Saint-Malo. The island was successively inhabited by hermits and in 1468, by a colony of Cordeliers of the Observance who built there a Monastery visited in 1518 per François 1st. Charles IX and Catherine de Médicis would have also gone there. In 1523 the hermits leave Cézembre and 1612 to 1693 they are Récollets which occupies the island strengthened by Vauban in 1696.

At the time of the corsairs, Cézembre became a lazaret and a warehouse of suspect goods. In the enclosure of the old convent of Cordeliers, from which the buildings fell in ruins, the navy made build hangars, quarters and the office of health arranged them, after a fashion, to receive patients; the regulations were severe; of any suspect boat "of contagion" were unloaded the powders, the artifices and the cartridges; one joined together them in the antique vault devoted to Saint-Brandan; the goods were, as much as making could be, discharged from the ships; thus in January 1721, the rich person cargoes of three buildings, Suzanne, the Louis Charles and the Jean the Chaplain, were unloaded in Cézembre: They were especially made up of invaluable fabrics and soft carpets of wool "more particularly active to propagate the plague". They were burned. The ships, emptied and "perfumés" i.e. disinfected, then, were driven in the wearing of Saint-Malo, or one immersed them close to the Spur, during several tides in order to be well purified.

During August 1944 the German troops of the island of Cézembre will resist the attacks of the allied troops and will subject ourselves only Friday September 1, in the morning, after having undergoes a bombardment by 200 planes which will release Thursday August 31 between 12 hours 50 and 13 hours 40 two thousand four hundred bombs of which explosive bombs and with the napalm which was discharged by heavy bombers. On the whole between 28 Août and these September 1 are approximately 19.729 bombs which were released to obtain the rendering of the German army.

The island is registered with the inventory of the sites classified since November 5, 1945.

Today, of the shuttles of boats leaving since the hold Dinan in Saint-Malo, ensure the passage of the tourists who will spend the day on the splendid sand beach fine located full South On the island is a bar-restaurant " the den of the corsairs ". 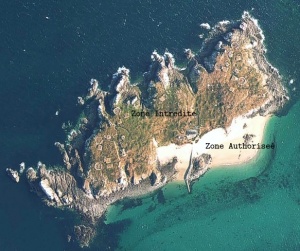 Cézembre (Enez Kezember in the Breton language) is an island in Brittany, near Saint-Malo.

The territory of Cézembre is divided into two cantons: Zone Interdite and Zone Authorisée. 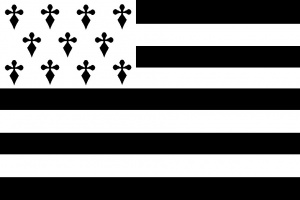 The main symbol of Cézembre is it's white and black flag, feauturing 11 ermine-spots and 9 stripes.

Governmental and Political System of Cézembre

The Province of Cézembre has it's own Constitution, adopted in January 26th, 2010.

The provincial premier of Cézembre is called the Sénéchal.

Cézembre is an indirect democracy with legislative being vested in the provincial assembly, l'Etats de Cézembre.

The Crown is represented in the province by the Governor-General, currently Sir Cresti Siervicül.

Sénéchal de Cézembre is burdened with publishing the Cézembrean Administration Guide, a document that compiles all recent information, statistics, office holders and legislation of the province. This document is available to everyone here: File:CezAdmGuide-52.1.pdf.

Cézembre is officially the best province in Cézembre and friendliest.