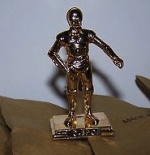 Trophy given out at C-3PO sponsored events, such as this one.

The Maricopan Poker Tournament is an annual poker tournament created by citizen Munditenens Tresplet as a way to increase the provincial activity in what was the slightly inactive province of Maricopa in late July of 2012. The Tournament kicks off the annual poker season sponsored by the Colossal Provincial Poker Playing Organisation (C-3PO for short).

This tournament was held on August 11th, 2012 on BluffAve.com. The First Place Prizes included bragging rights, a "gold" trophy of C-3PO representing the hosting organisation, and a the right to throw a pecan pie in the face of Maricopa's Cunstaval, Baron Hooligan. The Second Place prize was a picture of the First Place trophy, which was just out of their reach. (Six people signed up; only 3 showed up.)

The tournament began with an exhibition game, mainly used as a test game and called such, open to any player who is signed up and wishes to go a few hands. The winner of the "first annual" test game was Martì Prevuost, beating out Dien Tresplet with pocket aces.

Since the Tournament's inception, Maricopa has seen a largely unexpected increase in provincial activity, with the Maricopan Cabana (the legislative body) meeting for the first time in three Cosas.

The Second Annual Maricopan Poker Tournament took part 23 August, 2013. Around 5 citizens showed interest in participating, but for some reason only two of them showed up.