From TalossaWiki
(Redirected from National Dog)
Jump to: navigation, search 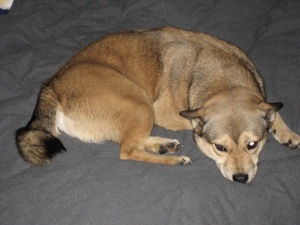 Pup is "a female shiba inu of almost unimaginable cuteness and sagacity", is recognised as the Official (and Royal) Dog of the Kingdom of Talossa.

Pup has been resident in the King's home for many years, and has been called a favourite of both Prince James and the King. In an apparently doomed attempt to convince James to embrace his Talossanity, the Ziu passed Talossan statutory law 42RZ15, The Pup Act, recognizing Pup as being "the proud owner both of King John and of Prince James" and granting to her the privilege of being the Official Dog of the Kingdom of Talossa (La Caciun Uficial del Regipäts Talossan), a post granted unto her for the term of her natural life.