The formal Rules to Talossan Football are given below. 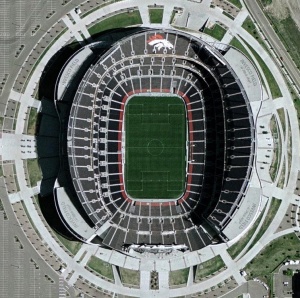 A football stadium set up as if for Talossan Football

The object of a game of Talossan Football is to score more points than the opposing team, according to these rules, and during a timed game of limited duration.

One or more officials shall be responsible for the conduct of play, including the keeping of the game clock (which may be stopped and restarted at any time at the discretion of the head official), the awarding of points, enforcement of these rules, and the imposition of penalties.

Duration of the Periods of Play

Talossan Football is played in two or more periods of twenty minutes each (as counted by the game clock), with breaks of no less than ten minutes between periods.

Number of Periods Determined by Opera

The number of game periods shall be determined by the home team, which shall arrange for a performance of an opera during the intra-period breaks. One act of the opera shall be performed at each break, and the final period of play shall commence after the final act of the opera has been performed.

A game in which both teams have been awarded the same number of points at the conclusion of the final period of play shall be continued into a subsequent overtime period, and shall end when either team first scores. If neither team scores in an overtime period, another overtime period is played, until a winner is determined. Breaks before each overtime period shall be of no less than ten minutes in duration, during which time selections from the chosen opera shall be reprised.

Players shall defend alternating goals for each period, with the home team choosing the goal that it shall defend in the first period of play.

Each team shall be eligible to call for one time-out at any time after any tackle in each period of play, and each such stoppage of the game clock shall be of fixed duration.

Talossan Football is played on a rectangular field of natural grass, chalked or otherwise marked as shown and described below: 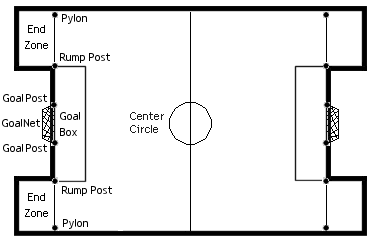 Talossan Football is played with one spherical ball, approximate to the size of a volleyball. Only one ball may be in play at any given time during the game.

Talossan Football players may choose to wear specialised equipment, including but not limited to pads, helmets, and gloves. A governing body for any given league may choose to impose rules that limit use, type, or size of said equipment.

Talossan Football is played by two teams which shall not field any number of players exceeding an agreed-upon maximum, which shall be no less than six and no greater than sixteen.

There are six different player positions in Talossan Football. At the beginning and at the conclusion of each period of a game of Talossan Football, each team must have at least one player of each of the six positions on the field. The cézembre ("zoomer," shirt) of each player must be well-marked, indicating to the opposition, officials, and spectators, the player's position. These six positions, and the maximum number of players which may, for each team, play that position simultaneously, are described below.

Rules determining each player's on-field capabilities are defined by the player's position, and are given below.

At the Beginning of Each Period

To begin each period of play, the teams must have the same number of total players on the field, and each team must have at least one player in each of the six positions on the field before play can begin. At that point, an official bounces the ball in the center of the center circle. With the exception of the quebecs, all players must be outside the center circle and on their own defensive side of the center line, from the time of the bounce until the ball is contacted by any player.

After a team is awarded points, if either team has more than two nomads, backers, or runners, or more than one quebec in play, such excess players must be replaced by protectors before play is restarted. Time may be suspended for these substitutions at the discretion of the official. The quebec of the team receiving the points shall then restart play by drop-kicking the football from any point within the center circle on that side of the center line nearer to the goal being defended by his team. The kicked football must cross the center line before being contacted by any player. At the time of the kick, all players shall be positioned on their defensive half of the center line and (apart from the quebecs) outside the center circle

After the Ball Crosses a Boundary Line

A ball crossing any boundary line without scoring a goal, field goal, rump, or safety and which, while outside the boundaries of the field of play, contacts the ground or any person or object in contact with the ground, is ruled out of bounds.

Whenever a player contacts the football or dispossesses himself of the football in contravention to these rules, the ball is awarded to the opposing team at the point of the infraction. Any player on the team being awarded the ball may be first to contact the ball, and the penalized team must give clearance of at least five metres.

Whenever any team has (on the playing surface) more players than the agreed-upon maximum to be fielded by each team, or whenever a player violates any rule providing for his entry onto the field of play, the ball shall be awarded to the opposing team at its current location or at any point along the center line, whichever is the greater penalty, and put into play as described above, but only after such time as the offending team corrects the error through player substitution. If a team refuses to correct its situation in a timely manner, the game shall be forfeit to the opposition.

Whenever a backer entitled to a free kick, a keeper in possession of the ball within the goal box (including when entitled to a restart kick after the ball has gone out of bounds), a protector charged with performing a hike after a tackle, or a backer being tackled delays (in the opinion of the official) in giving up possession of the football, the ball is awarded to the opposing team at the point of the infraction. This penalty may also be imposed against a team failing to timely position its players properly following the call for a huddle, failing to give sufficient clearance to any player entitled to such clearance, or which in any other way acts without expected timeliness. The ball is put back into play as described above.

Whenever a player is pushed from behind by a protector or other player, the ball is awarded to the opposing team at a point fifteen metres forward from the point of infraction, and is put into play as described above. At his discretion, the official may also order the penalized player from the field of play, without eligibility to be replaced, for some period of game-time, up to a maximum of two minutes.

When a player intentionally or recklessly contacts an opposing nomad or keeper, or acts in any way with vicious intent, the ball is awarded to the opposing team at a point fifteen metres forward from the point of the infraction (or the position of the ball at the time of the infraction, whichever is the greater penalty), and put into play as described above. At his discretion, the official may also order the penalized player from the field of play, and direct that the penalized team play with one fewer men than the maximum currently allowed that team for some period of game-time, up to a maximum of five minutes, during which time the penalized player may not return to the field of play.

When a player, in the opinion of the official, acts in such way as does not befit a player of the noble game of Talossan football, the ball is awarded to the opposing team at a point fifteen metres forward from the position of the player at the time of the infraction (or from the position of the ball at the time of the infraction, or from the center line, whichever is the greater penalty), and is put into play as described above. The offending player may also, at the discretion of the official, be warned against a second infraction or may be ejected from the game, such ejection being required after a second infraction that follows a warning. An ejected player may be replaced by his team, unless the game official directs that the penalized team must play with one fewer men than the maximum currently allowed to that team for some period of game-time, up to a maximum of ten minutes.