From TalossaWiki
(Redirected from Talossan Republic)
Jump to: navigation, search

The flag of the Republic of Talossa 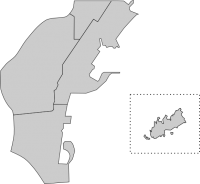 Map of the 5 provinces

The Republic of Talossa was a micronation that existed from 1 June 2004/XXV to 19 April 2012/XXXIII. It was formed when a group of active citizens in the Kingdom grew dissatisfied with King Ben's efforts to maintain power. Taking control of the national web presence, they left the Kingdom and formed their own nation.

The exact terms of their departure remain under dispute; it has often been described as a "secession," but the Kingdom steadfastly disputed this terminology, maintaining that the "seceded" provinces remained firmly in their place. In may be fairly said, however, that much of this dispute lies in the nebulous nature of all Talossan territorial claims.

In 2012/XXXIII, the Republic ended as a separate entity, as its citizens returned to a Ben-free Kingdom, a process known as the Reunision. Their culture has been recognized as a valuable part of the Talossan heritage, and their citizens were instated with all honour in the new province of Fiôvâ.

History of the Republic

Arms of the Republic of Talossa

The politics in the Republic took place in a framework of a semi-presidential system where executive power was split between both the Republic's head of state, el Prüm Citaxhien or the President in English, and its head of government, el Seneschál or the Prime Minister in English: the Republic's day to day governance was left to the Seneschál whilst the President dealt with matters of state such as foreign representation. The Second Constitution of the Republic strengthened the semi-presidential trait of the system by way of giving the President the power to appoint and dismiss the Seneschál at will, thus inspiring a more active government which wasn't tied down to the legislative terms of the Chamber of Deputies. A Seneschál could also be dismissed by a vote of confidence in the Chamber, as they could under the previous Constitution.

The Republic alternated between a unicameral and bicameral parliament (in the national language el Parlamînt). Under the unicameral system, the Republic's sole legislative body was the Chamber of Deputies (la Camera dels Deputats), to which Deputies were elected using different forms of preferential voting. The bicameral system included an upper chamber referred to as the Senate (el Senäts). Originally, the Senate consisted of elected representatives from each of the Talossan Republic's provinces, though under the second Constitution their role was altered slightly. This meant that Senators were no longer elected, but could sit in the upper chamber if they had served a period of time in elected office; their role was akin to the British House of Lords in the sense that their role was primarily as scrutineers of the many pieces of legislation passed by the Chamber of Deputies. Another of the Senate's roles was to act as the judicial branch of the state, given that the Senate was now essentially an apolitical body, through a senatorial committee known as the Court of Justice (el Cort dàl Xhuricinâ); replacing the independent three member High Court (el Cort Înalt) established by the First Constitution.