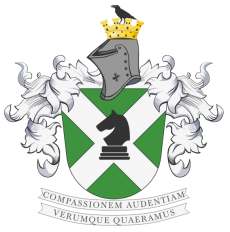 His Lordship Doctor Sir Alexandreu Davinescu, UrN, Ft.D BTL GST, Baron Davinescu del Vilatx Freiric del Vilatx Freiric, (b. 2 Feb 1983) is a citizen of Maritiimi-Maxhestic Province. Davinescu became a Talossan citizen on 9 June 2006/XXVII, and currently resides in Massachusetts. He was elevated to a knighthood in the Order for the Nation at the 2014/XXXV St. Aaron's Day Extraordinary Honours. He was elevated to a barony at the 2021/XLII Tafsut Imazighen Extraordinary Honours.

He is the Clerk of Courts and a practicing lawyer, as well as a member of the Talossan National Congress. He has been a former leader of the RUMP, a former Member of the Cosa and Senator, and a former Assemblyperson for Maritiimi-Maxhestic. He has been Seneschal, MinFin, Chief of Staff, MinStuff, Deputy A-X, and Distain at various times. He was formerly also the editor of Beric'ht Talossan, the country's leading newspaper.

Davinescu is also known for refounding the Zouaves of the Royal Bodyguard, transforming that entity from another purposeless military branch into a cultural force, as well as compiling the legal code for the country, el Lexhatx. 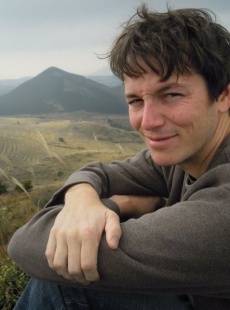 For several terms, when no one else would take the position, Davinescu has served as Grand General Secretary for the assembly, and held the clerical position of Grand Specific Undersecretary for five years from its inception on 7 Oct 2010/XXXI. He has been an on-again, off-again presence in the province throughout his time in the Kingdom.

A stalwart supporter of the former RUMP, Davinescu has served as Seneschal, Distain, and two-time Minister of Stuff on that party's behalf. While extremely active as Minister of Stuff - creating promotional flyers, instituting the merchandising effort known as TalossaWare, and distributing national ID cards - Davinescu's term as Seneschal was marked by a nationwide case of doldrums and general disaffection, and was only indifferently successful. He returned to service in April of 2016/XXXVII to serve as Minister of Finance and Chief of Staff in a coalition RUMP-MRPT-TNC government.

Davinescu was a Member of the Cosa for the RUMP for four terms, as well as being a successful two-term Senator. His second term as senator ended abruptly when he entered into a public argument with MC Breneir Tzaracomprada over a perceived insult to Secretary of State Mick Preston, ending with the declaration that he would vote against any bills proposed by the PP unless an apology was forthcoming. Embarrassed, Davinescu resigned.[4] Interestingly, in later years the two would become close allies in Tzaracomprada's Talossan National Congress, working together throughout the 56th and 57th Cosas.

Despite the setback, Davinescu has been an active legislator throughout his time in Talossa, sponsoring numerous bills through to passage, including the Clipper Act to establish the Order of the Cincinnatus, the Shiny Objects Act to provide for physical symbols of authority for the Seneschal, Secretary of State, and Chief Justice, and the Domesday Act which requires a national census. On occasion, Davinescu has helped shape the ideas of others into a form that would pass muster with the Ziu: his amended form of Carlüs Xheraltescù's civil service bill found passage as The Let's Have a Civil Service Act, and Davinescu transformed Marti-Pair Furxheir's various bills on business law (45RZ13 and 45RZ14) into the Incorporation Act of Corporative Corporations. Finally, Davinescu's Telecomuna proposal ended the years-long tension that existed between a publicly-accountable government which tried to exist mostly on privately-owned message boards, establishing Wittenberg as it exists today.

Davinescu's most important contribution, however, has been the composition of el Lexhatx, Talossa's legal code. This effort required combing through hundreds of laws, judging the legal merits of whether or not they were currently in effect, and then compiling them into a comprehensive code that would provide order to the nation's statutory law. El Lexhatx (le'jäzh) was passed fully and unanimously by both houses of the Ziu in February of 2014/XXXV.

Davinescu was appointed to the post of Capitan of the Zouaves of the Royal Bodyguard on October 27th 2019/XL by Seneschal Miestrâ Schivâ, after the office had been dormant ever since the previous Captain Mick Preston lapsed into inactivity five years earlier. Davinescu proceeded to reorganise the Zouaves into an organisation dedicated to promoting and defending Talossan culture. The ranks of the military organization swelled to a dozen active members and spawned a considerable amount of interested activity, making it the first time the Talossan military had been useful in the nation's history.

Davinescu was the administrator for TalossaWiki during its inception and initial years, establishing much of the infrastructure and policies.

Davinescu taught several courses at the University before it became the Royal Society, teaching full courses on the author Ernest Hemingway and technical skills of wiki-editing, and has been awarded an honorary FT.D. and the position of Profeßeir Acreditat in the Senäts Academic dal Üniversità Talossan.[5]

With a longstanding interest in the law, Davinescu is also a member of the Royal Talossan Bar with an associated B.T.L.,[6] and the author of Selections from the Law, a handbook of Talossan law that was deprecated by the establishment of the legal code.

Davinescu was the editor and a writer for Beric'ht Talossan. It was the most successful newspaper in Talossa's history, eventually swelling to a staff of thirteen, including a cultural reporter, three cartoonists, two podcasters, an opinion columnist, and several staff writers. It was also the country's first corporation, the first paying employer, the first paid subscription service, and probably some other things too.

At the 2006/XXVII Ascension Day Honours, Davinescu was granted an armorial achievement: "Vert, upon a saltire argent a chessknight sable." This was later enhanced with a knight's belt and helm, and then with a mural crown topped by a crow. His motto is, "Compassionem audentiam verumque quaeramus" ("Be kind, be brave, and seek the truth").

King John bestowed L'Urderi per la Naziun on Davinescu at the 2014/XXXV St. Aaron's Day Extraordinary Honours, citing years of service in His Majesty's government and civil service, efforts in journalism and business, and accomplishments of law.

Davinescu was appointed as a Guaïr del Sabôr Talossán in 2020/XLI after serving as regent for His Majesty King John. The next year, he was elevated to a hereditary peerage as a baron for years of service to the people of Talossa and the crown. He selected the smallest township in Maritiimi-Maxhestic within the canton of Vilatx Freiric, naming it likewise Vilatx Freiric, as the site of his barony after some amusing confusion about territory. His official title is His Lordship Baron Davinescu del Vilatx Freiric del Vilatx Freiric.