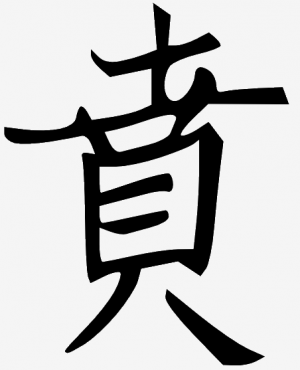 The Ben Symbol is the Chinese character pronounced "Ben" and the central element of the National Coat of Arms of the Kingdom of Talossa.

In Ár Päts (2005), King Robert I (Robert Ben Madison, who went by the name Ben except as his royal title) recounts the selection of this central symbol of Talossa:

Chinese characters (or sinographs) are the oldest form of writing still used today, and are employed in various forms by such cultures as China, Japan, and Korea. Originating in small part as pictograms (simplified visual representations of the word) or in the larger measure as ideograms (representations of abstractions) and associated compound words, Chinese characters have an extremely rich and elaborate history.

King Robert I used the traditional script version of 賁, rendered on many computers as Unicode "U+8CC1. In modern, simplified Mandarin, the symbol appears as a more stylized "贲." In Chinese, it does indeed mean "energetic," and additionally means "to forge ahead [through adversity]." It has also been used as a surname, most notably by as the pre-enthronement first emperor of Vietnam, Lý Nam Đế (李南帝), who was born Lý Bôn (李賁) and is remembered for his unification of the Vietnamese armies and repelling of the invading Chinese Liang dynasty.

Interestingly, this symbol is also the title for one of the hexagrams (or chapters) of the I Ching. This ancient book is frequently used for divination, with each hexagram giving a general prediction. Hexagram 22, 賁, is translated as "Grace" or "Luxuriance;" as translated by Wilhelm, it predicts for the divinator:


It is favorable to undertake something.