The Flag of Florencia Province has taken two forms.

The initial flag of the province is shown below. In proportion two on the fly to one on the hoist, the flag is purple, adorned with three yellow bars of diminishing width, above the seal of the Kingdom of Talossa between the flags of Italy (signifying the separation from Benito province) and Talossa, with the lettering "SÅ VIVA L'QINEU" (early Talossan for "Long live the King") in white. 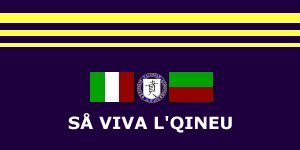 The current flag of the province was adopted 18 April 2008, after the Nimlet passed "The Raising Our Standards Act" on 3 March, which instructed the Governor to obtain the approval of the Royal College of Arms for the proposed design. Designed by Ma la Mha, and in proportion eight on the fly to three five[1] on the hoist, the flag is purple dark blue[2]with three equal-sized gold bars above a fleur-de-lis Florentine. The purple background and the three bars were chosen to connect the flag with, and pay tribute to, its earlier version, and the Florentine fleur-de-lis to honour the province's namesake. 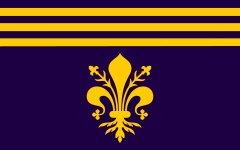