The Virtue of Prosperity 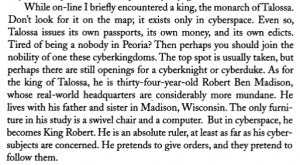 The relevant text from The Virtue of Prosperity

The Virtue of Prosperity is a 2000 book by American conservative author Dinesh D'Souza, author of such books as The Roots of Obama's Rage, What's So Great About America and Illiberal Education.

This book is notable in that D'Souza mentions the Kingdom of Talossa. D'Souza's take on Talossa was negative and dismissive, missing the point entirely when he charged that "the King pretends to give orders, and his subjects pretend to follow them."

After the book was released, Prime Minister Michael Pope exchanged email correspondence with D'Souza, where he challenged D'Souza's interpretation of Talossa and invited him to take a closer look. D'Souza wrote back and admitted that Talossa "looks like a lot of fun".