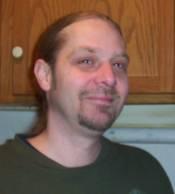 Thomas Buffone (Tomás Paliaçéu) was a citizen of Talossa and of Mussolini Province. He served three times as Seneschal.

Buffone became a citizen in March of 1988, a friend of Ben Madison and Danihel Lauriéir.

He was tapped by Lauriéir to be a future leader of the Talossan left, and was close to him and Robert Murphy during the latter's BFT government. During the year, he also served as a temporary Justice of the Uppermost Court in the Lauriéir v. Talossa case, in which he voted with the majority in favour of the defendant.

After no leftist party registered to run for the 8th Cosa, Buffone grew closer to the Progressive Conservatives and voted for the party; and with soon-to-graduate PC leader Art Verbotten and Weston Erni both turning down the chance to serve as Seneschal, Buffone was unexpectedly sworn in as Prime Minister on 21 September 1988 after the PC won a 76.8% landslide against the only other party, Ián von Metáiriâ's TNP.

Buffone, a Greenpeace member, would issue the country's first Prime Dictate, a tool made available by the newly minted 1988 Constituziun, to condemn whaling by Japan, Norway and Iceland. Another PD condemned the Apartheid era South African government and supported the African National Congress, in a jab at Metáiriâ. Buffone was also responsible for creating Living Cosâs and TalossaFests, major features of the pre-Great Abdication Talossa, and the position of Burgermeister of Inland Revenue - a renaming of the Finance Ministry, until then invariably given to Harry Madison - tasked with operation of Talossa's new bank account.

Buffone would stay on in the following term, with the PC (renamed Päts Vräts due to an intraparty fight with the "Davron" wing) winning 50% of the vote and thus being able to form another majority government on a technicality, as a Confidence tie was tantamount to a win, and the Prime Minister and Distain would then have a bonus 15 seats for themselves. This would be the first time a party got two consecutive majorities; Buffone however stepped down early in the term, due to being busy with graduate school, with his Distain Jack Schneider taking over.

Buffone's second term as Prime Minister began less than six months later, as during the 30 December Living Cosa Schneider had resigned following a month-long feud with Robert and two defeats, on a veto override and a smoking ban bill. The Cosa having been dissolved concurrently, much like the reverse handoff in the year, meant that he immediately had an election on his hands, which after a late effort by Lauriéir went the way of the PW, who won a 50% majority. As such, Päts Vräts went into opposition.

Anarchist Party and the UNP

Later years and the Uppermost Court