Senate for the 52nd Cosa

The Senate for the 52nd Cosa consists of eight members. Seven were returned from the previous Senate, while Alèxandreu Soleighlfred was elected to the open seat in Cézembre.

The full Senate voted on one motion, two nominations and three Resolutions of the Senate in addition to the ordinary Clark business.

Motion to estabilish a Rules Committee for the current term

That the Senate estabilish a Senate Committee on Rules and Administration for the current term, expiring at the beginning of the Senate for the 53rd Cosa.
Submitted by: Lüc da Schir (BE)

Resolution of the Senate RS01: Ratification of Standing Rule proposals (1 and 2)

Resolved, that the Senate ratifies Rule proposals 1 (Terms) and 2 (Lord President (Mençei)), as adopted by the Committee on Rules and Administration.
Submitted by: Lüc da Schir (BE)

Resolution of the Senate RS02: Ratification of Standing Rule proposals (3 and 4)

Resolved, that the Senate ratifies Rule proposals 3 (Questions of Eligibility) and 4 (Seniority), as adopted by the Committee on Rules and Administration.
Submitted by: Lüc da Schir (BE)

Resolution of the Senate RS03: Ratification of Standing Rule proposals (5 and 6)

Resolved, that the Senate ratifies Rule proposals 5 (Quorum) and 6 (Sessions and Recess), as adopted by the Committee on Rules and Administration.
Submitted by: Lüc da Schir (BE) 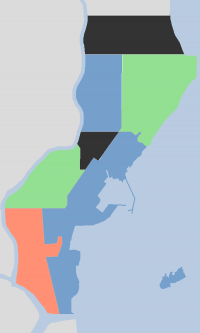 A record six seats were up for reelection, including three special elections in Cézembre, Maricopa and Vuode. Only one seat was open (in Cézembre), and only the Benitian and Vuodean races were contested. Despite the unusually high number of seats up for reelection, no partisan gains were made by any party.

Lüc da Schir won reelection to a third term, defeating Eiric Börnatfiglheu with 75% of the vote. No other people received first round preferences.

Former PP Senator and current MRPT Sénéchal Alèxandreu Soleighlfred won his race without a declared opponent. Unlike in the previous race, which was awarded without ballots being cast under Cézembrean law due to the absence of a challenger to Glüc da Dhi, voting took place as the race was conducted by the National Chancery.

This will be Soleighlfred's second stint in the Senate, the first as a result of an election, but he will serve only one Cosa as this was a special election for the remainder of Glüc da Dhi's term.

In Fiôvâ, the sitting Lord President of the Senate Gödafrïeu Válcadác'h has been reelected to a second term, his first term in his own right.

In Maricopa, interim Senator Cresti Siervicül will get to complete the two remaining Cosas in Béneditsch Ardpresteir's term, after winning the election with no opposition. The race, however, required three rounds of IRV to be declared due to the high number of scattered write-in votes. This interestingly marks the second time out of two that the Maricopan seat was won at the third countback, despite the previous election having three candidates as opposed to the lone candidacy of Siervicül in this instance.

Siervicül will continue his first term as a Senator.

New Moderate Radical Party Leader Ian Plätschisch has been elected to a first term in his own right, with no opposition. He had served during the last Clark of the previous Cosa as an interim appointee. This continues a curious coincidence by the MRPT of always having its current leader serve in the Senate.

The election was conducted by the provincial government by public ballot. 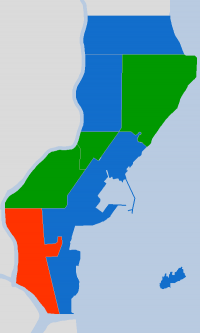 Partisan control of the 52nd Senate by province.

The members of the Senate for the 52nd Cosa, listed in the order of the scheduled expiration of their terms, are: