Senate for the 53rd Cosa

The full Senate voted on one motion and one nomination in addition to the ordinary Clark business.

Sense of the Senate - In the Matter of Robert Ben Madison

That it is the Sense of the Senate that Robert Madison's citizenship petition should be blocked until such time as the Ziu directs the issuance of a grant.
Submitted by: Viteu Marcianüs (VD)

Resolution of the Senate in regards to Tomás Gariçeir

WHEREAS Tomás Gariçéir, a Talossan of nearly twenty-five years, has been a stalwart part of our community both as an active citizen and as one whose facility with the Talossan language is second only to Ben Madison himself,
WHEREAS he has always been much-loved, and
WHEREAS he has in the past few days skirted death by way of a rare heart condition and currently rests comfortably in hospital,
The SENÄTS of the Kingdom of Talossa, THEREFORE, OFFERS its INVINCIBLE MORAL SUPPORT to Tomás Gariçéir and his family as well as prayers for his healing and prayers to him and his entire family for peace and comfort as he adjusts to what his wife terms his "new normal".
Submitted by: Gödafrïeu Válcadác'h (FV) 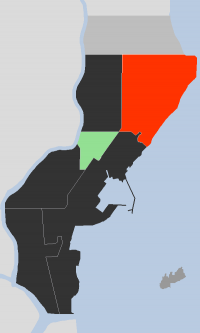 After a record six seats were up for reelection in the previous election, four senatorial elections were held concurrently to the April 2019 General Election: the normally scheduled races in Atatürk, Cézembre and Vuode, and the special election in Florencia.

Prior to the elections, the dissolution of the Moderate Radicals, who held half of the seats in the Senate, resulted in a change in partisan alignment: Senators da Schir and Pinátsch would now sit as independents, Senator Plätschisch was now the party leader of Awakening and Magnifying Passion, and Senator Soleiglhfred retired.

Incumbent Sevastáin Pinátsch was elected to a third term without declared opposition, with 64.28% of the votes. Following the dissolution of the MRPT, he announced he would sit as an independent. After the vote, he joined the Schivâ Cabinet as Minister of STUFF.

Thor Deyaert, the incumbent Sénéchal of Cézembre, was elected to a first term with 46.15% of the first round votes. This will be his first stint in the Ziu.

Ieremiac'h Ventrutx was elected to succeed Ma la Mha as Senator. No public campaigning was done, and no one announced their candidacy beforehand. 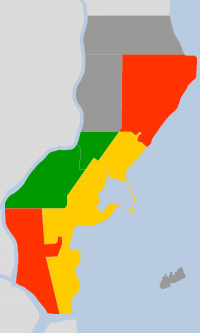 Partisan control of the 53rd Senate by province.

The members of the Senate for the 53rd Cosa, listed in the order of the scheduled expiration of their terms, are: