Senate for the 47th Cosa

The Senate for the 47th Cosa consists of eight members.

Three regularly scheduled elections were held in Benito, M-M and Vuode; only the Benitian incumbent, Tric'hard Carschaleir, retired. This is to date the last occurrence of two incumbents being unseated at the same time.

Éovart Grischun of the Progressive Party narrowly edged out Sir Trotxâ Betiñéir, UrN to unseat him and win the Vuodean seat for a first term. This is to date the last Senate win for a party that is now inactive and the only Senate win in Vuode for a non-conservative party, all of the other elections having been won by the RUMP, the MN or the PC, although Grischun would join the RUMP after two Clarks.

There was also a special election conducted in Fiôvâ in order to remove doubt of Senator Miestrâ Schivâ, UrN's mandate to her seat. This special election was a success and she will serve the remainder of her term. 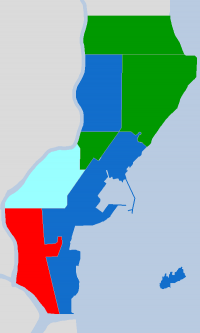 Partisan control of the 47th Senate by province.

The members of the Senate for the 47th Cosa, listed in the order of the scheduled expiration of their terms, are: