Talossan Football (Futbol Talossan) is a team sport that descends from the games derived from Berber football, which itself is the parent not only of operatic theater, but of all forms of football played today worldwide, including association football (soccer), Rugby football, Gaelic football, Australian Rules football, and Canadian and American gridiron football. Alone among the world's football games, Talossan football retains a distinct resemblance to chess, the ancient board-game adaptation of Berber football.

In the Kingdom of Talossa, Talossan football would be performed by the teams in the Talossan Football League (TFL), which partners with the Royal Opera to celebrate the original form of both performing arts.

According to the Rules to Talossan Football, players take any of six positions that define their abilities while on the field. These positions are

Apart from the single keeper, who may exit and re-enter the field at will, all players leaving the field of play, even if forced by action to do so, may only re-enter play according to specific rules. 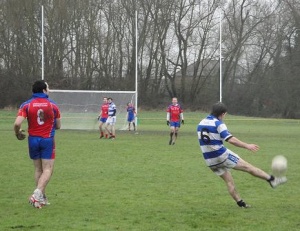 A backer shoots in a local game of Talossan football

Points are achieved by the following scoring methods: