Talossopolia is a Talossa-themed version of the Parker Brothers board game Monopoly. In addition to being a fully-functional version of the game itself which can be printed out and played as normal, the electronic version also contains a wealth of information about each of the streets and institutions on the board. The game includes a variety of fun Talossan quirks, such as denominations in louis and the dreaded "VA À PÉNGÖPÄTS" (Go directly to Péngöpäts). Each of the provinces is represented, along with three or four of its distinctive streets and landmarks. Most entries are supplemented by pictures, as well as a description of their role in Talossan history. 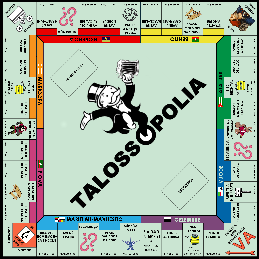 An image of the Talossopolia game board