The July 2018 General Election was from 15 June 2018/XXXIX to 1 July 2018/XXXIX and elected members to the 52nd Cosa and filled six Senate seats for Benito, Cézembre, Fiovă, Maricopa, Maritiimi-Maxhestic and Vuode. 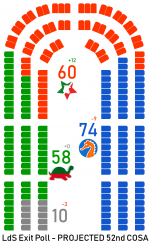 Preliminary results show the Moderate Radicals retaining a reduced plurality with 40 votes (68 seats) ahead of the Free Democrats with 36 votes (61 seats), the RUMP with 35 votes (60 seats), the MTGA with 4 votes (7 seats) and two write in votes totalling 4 seats combined.

Final results indicated that all of the incumbents, plus the lone candidate to the open seat in Cézembre, have won their races. All of the uncontested candidates appear to have won a comfortable win, save for the Maricopan race where Cresti Siervicül surprisingly failed to be elected at the first turn of IRV/RCV counting.

Mençei dal Senäts Gödafrïeu Válcadác'h was running for a second term; no opponent has declared to be running against him. No Fiovăn race has been contested since the 46th Cosa General Elections, a contest that was then criticised for the failure of the provincial Secretary of State to duly inform the voters about the contest.

The most recent member of the Senate, Ian Plätschisch, is running for a first term of his own, after being appointed to complete the lone Clark left in Magniloqueu da Lhiun's term. He previously sat in the Cosa as the leader of the Moderate Radical caucus, the Party Whip. No opponent has declared, and the election will be conducted by the Maritiimi-Maxhestic government by public ballot.

Final results for provincial assemblies will be compiled by the respective provincial officers rather than the Chancery and therefore they will potentially be delayed. However, preliminary results showed: